Whatever Became of “Songs of June”? 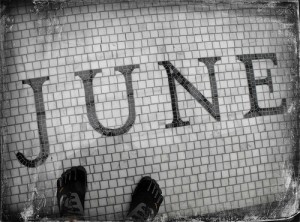 In June 2011, I set myself a challenge to write a song a day for the entire month. I also intended to record and upload each one to Youtube upon completion, for you all to hear.

June got really busy. I was possibly one of the busiest months I’ve had in the past two years. Despite that, I completed the challenge, and by May 1st I had thirty new, complete songs (thank goodness June doesn’t have 31 days – I think next time I’ll choose February!). I’ll admit that I had to double up on a couple of days – there were days when I didn’t even have time to pick up a guitar (one song was written entirely in my head), so there were occasions where I’d write two songs in a day to compensate (this only happened a couple of times though). But I’d say that’s still legit! Thirty songs in thirty days was the point!

Although I successfully completed the challenge, I did fail a bit in terms of posting the songs for you all to see. We ended up traveling to Cape Town in that month for an impromptu mini-tour, which meant being away from my video recording setup, as well as no internet access. When I got back home, I had such a backlog of songs to record and upload that I lost momentum a bit. Over the ensuing months, I continued to post songs as and when I was able, but by the time I got to the 17th song I figured that most people had probably lost interest. I was wrong – people still ask me about it, and now I feel bad for not following through on sharing the journey with you!

So I thought maybe I’d start from scratch. My idea is to record/film all thirty of the songs again, and post them on this blog with the lyrics and backstories.

And then maybe, if I’m feeling really crazy, I’ll set myself another similar songwriting challenge! Maybe you can join me next time!

What do you all thing? Would you like me to rerecord and repost my “Songs of June”? Let me know in the comments section below!