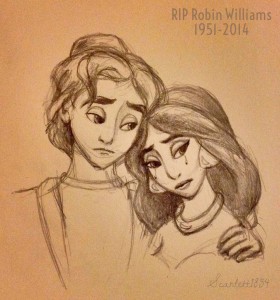 I don’t often publicise my thoughts and feelings on the deaths of famous people. There are a couple of reasons for this. One, I don’t want to perpetuate the myth that the death of a celebrity is somehow more tragic than the death of an “ordinary” person. Two, I know that whatever sadness I may feel pales in comparison to that of the family and friends who are dealing with the very real loss of someone they loved dearly. That said, I have been struck by the outpouring of gratitude for Robin Williams’ life that has been flooding my various social media feeds since the news of his death was made public, and I am compelled to issue my own thank you note to the man whose voice is deeply embedded in the consciousness of my generation.

Laughter is an amazing gift. It lifts the soul, nourishes the mind and even boosts the immune system. Robin Williams punctuated our lives with many beautiful moments of sweet laughter. He brought lightness to many heavy topics (such as divorce, love, death and loss) without belittling them in any way, and in doing so helped many of us to deal such issues in our own lives.

Life is both a comedy and a tragedy – it is comprised of both laughter and tears. Williams always brought a deeply human element to even his most comedic roles (amazingly, even when playing non-human characters). His voice alone could clearly convey a broad range of human emotions. And although Mrs. Doubtfire is a movie that is widely noted for its hilarity, what sticks in my memory is the earnest, teary-eyed expression of a man who is brokenhearted at having to live apart from his children. This, I believe, is what made Williams so unique and so beloved – his ability to make us both laugh with joy and cry with compassion.

Thank you, Robin Williams, for the laughter. A major component of our collective grief is undoubtedly the wish that we could’ve returned the favor and given back to you in kind. Thank you also for the tears, which can be just as healing as laughter. That the world feels your absence so profoundly is a testament to how many lives you affected through your art.